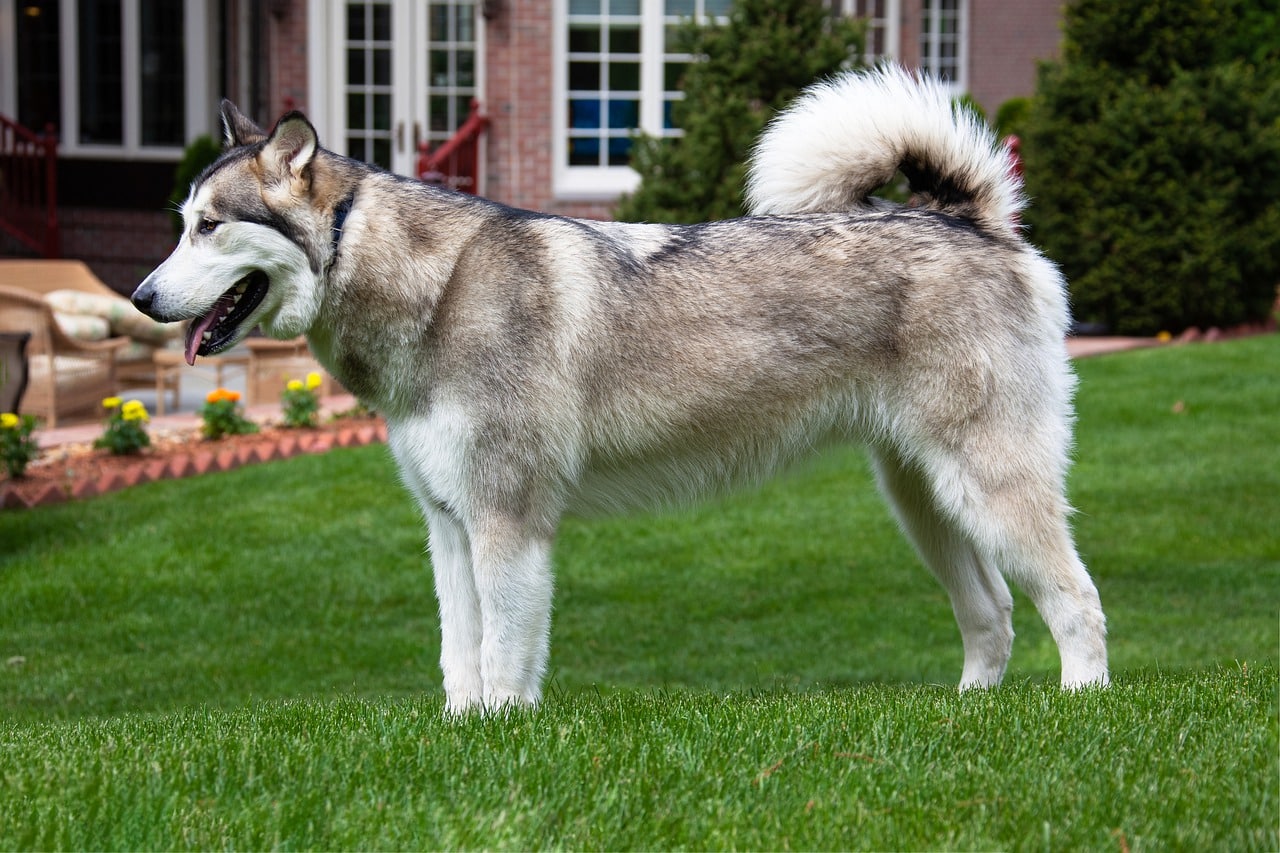 This big fuzzy breed proved its strength and stamina by pulling sleds in the far north. Stunningly beautiful but very stubborn, the Alaskan Malamute breed is best suited to an experienced owner that has the patience to both train and exercise them properly.

The Malamute’s build says “working dog”, from the deep chest to the powerful, well-muscled and compact body. The breed has a broad head with upright, triangular ears, and a wide muzzle. The tail is arched up over the back, except when the dog is working. The Alaskan Malamute has been described as “wolf-life”: although it has a somewhat lupine appearance, the breed is smaller and more rounded than its nearest wild relative, the Grey Wolf.

The Malamute’s eyes are almond shaped, and should be brown (while not accepted by some breed standards, blue eyes are also common). Their thick, waterproof coat protects them from the biting cold of the north. The undercoat is dense and woolly, while the top coat is shiny and waterproof. The Alaskan Malamute sheds heavily twice a year with the changing of the seasons. Typical coat colours include grey and white shades, sable and white, black and white, seal and white, red and white, or solid white.
Health
While generally a healthy and long-lived breed, the Alaskan Malamute can suffer from one or more of the following health issues:
• Hip Dysplasia
• Elbow dysplasia
• Inherited polyneuropathy
• Osteochondrodysplasia
• Cerebellar hypoplasia
• Heart defects
• Eye problems (particularly cataract and progressive retinal atrophy)
• Zinc deficiency
• Hypothyroidism
At NewDoggy.com, we promote puppies coming from reputable breeders, who use genetic testing and good breeding practices to remove genetic conditions from their breeding lines. NewDoggy.com’s Health Certificate certifies that all promoted puppies are in good health.

The Malamute is a very clever dog breed. Their intelligence is only equalled by their stubbornness! For this reason, they are not recommended for first time dog owners, especially since their size and strength means they can be particularly difficult and borderline dangerous without proper training. This is a dog that really benefits from early socialisation and training, as this will allow him/her to gain confidence in their owner.

Malamutes tend to be pushy, vying to be “top dog” in the house, and need a fair but firm hand from all family members to stop them becoming obstinate or bullying. That said, a well-trained and socialised Malamute makes an incredible companion. They are usually very friendly to most people, making them terrible watchdogs, but excellent playmates for adults and older children.

Alaskan Malamutes must have proper exercise to be happy. This breed was developed for arduous work pulling sleds in the far north, and will not settle for life as a couch potato! Your Malamute will be happiest in a home with plenty of space, along with lots of exercise and play. The Malamute is a wonderful choice if you are looking to get into canine sports such as sledding, skijoring, or canine agility. Keep in mind that even with plenty of training, it’s almost impossible to prevent Malamutes from digging: they absolutely adore it! This breed rarely barks, but has a distinctive howl and may “talk” to you with a “woo woo” noise.

Please fill in the below form and we will let you know when a new Alaskan Malamute litter arrives.