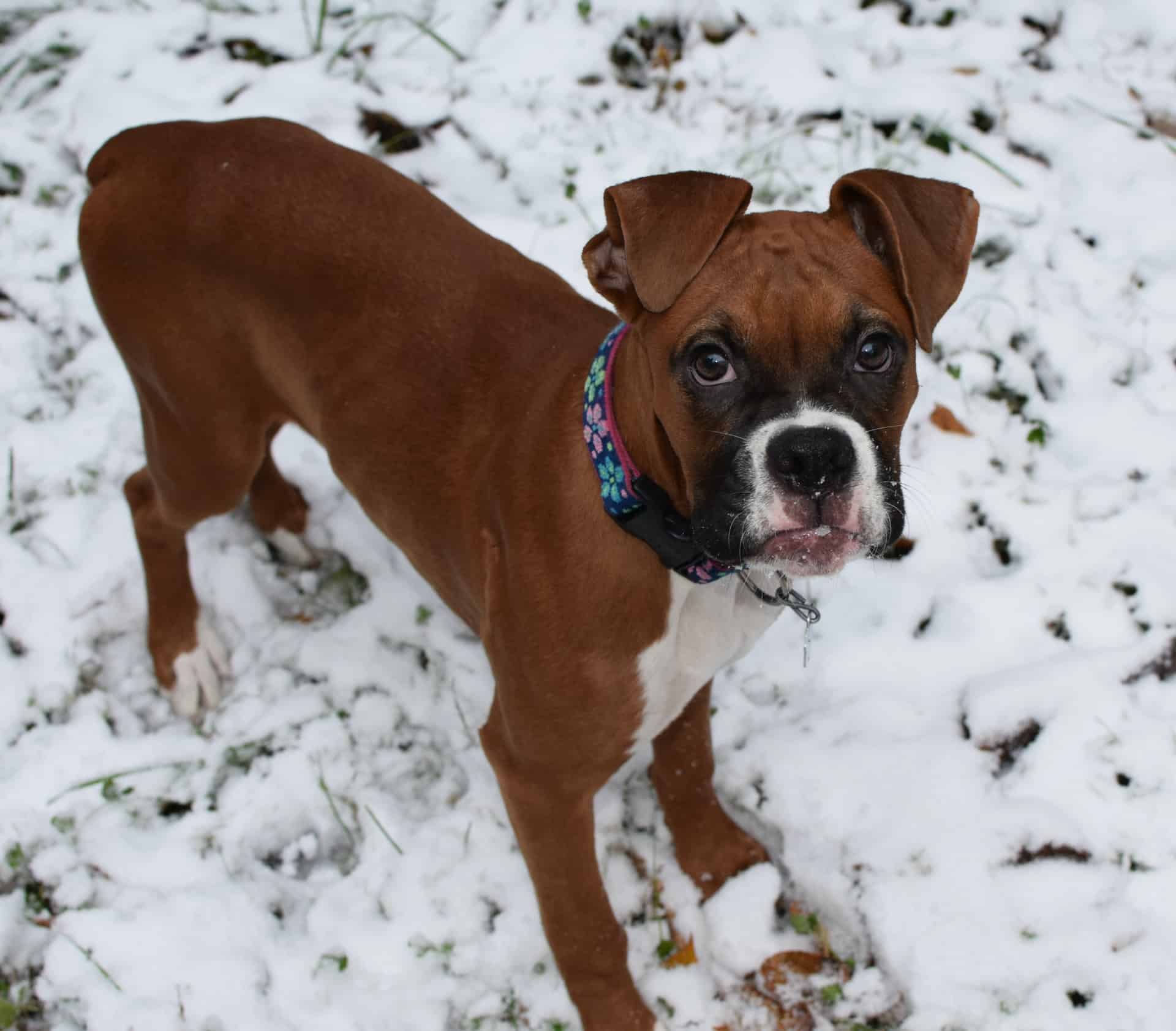 The Boxer is a clever breed with a friendly nature. They can look intimidating, but are actually very friendly and sweet-tempered. Boxers are slow to mature, and remain very “puppy-like” in their early years.

The Boxer has a noble head, with a distinct under-bite on the muzzle. The ears are naturally floppy. Traditionally the ears were cropped, but now illegal in many countries, as is tail docking, which was also traditional for the Boxer. There is a line of bob-tailed Boxers from the United Kingdom, which were bred to have naturally short tails, though the FCI does not accept stump-tailed dogs.  The Boxer has a square build, with quite a long neck, and a deep chest.

The Boxer has a sleek and smooth coat that needs minimal grooming. They shed frequently, but this can be reduced by brushing them weekly. They are usually brindle or fawn, but White Boxers exist, though they are usually not accepted in the show ring. White Boxers are often deaf in one or both ears. Fawn or brindle Boxers may be white marking, though white markings that cover more than a third of the body are not accepted in the show ring. Boxers often have a black mask marking.

The Boxer is generally a healthy breed; however they are prone to a few health conditions:

The Boxer is a clever breed with a friendly disposition. They have a reputation as a stubborn breed, but this is often due to using the wrong training techniques. Boxers often respond best to positive reinforcement, and will happily cooperate in exchange for a reward.

The Boxer was originally bred as a working dog. They can look intimidating, but they are very friendly and generally sweet-tempered. They are fun loving, are have been called the clowns of the dog world. Boxers are gentle with children, and while wary of strangers, they are generally polite to people. They have been known to be aggressive to other dogs, especially those of the same sex, but they are often very gentle with puppies.

To get the best from your Boxer, set him/her up for success by socialising them from an early age. Get your young Boxer used to different situations, giving them the time to get confident with new people and places.

As charming as the Boxer is, the breed has a few foibles. They tend to drool, snore and snort, and are also prone to flatulence (though a good diet can help with this last issue). They are slow to mature, and remain very “puppy-like” in their early years. Young Boxers often jump about the place and on people if you’re not careful. If you can accept these foibles, you’ll find that you’ve adopted a very loyal and friendly dog that is very adaptable. Boxers can live in apartments, and make good family dogs. They do need a lot of exercise and opportunities to play; younger Boxers will especially appreciate the chance to play and run about.

See all Boxer puppies for sale

Please fill in the below form and we will let you know when a new Boxer litter arrives.