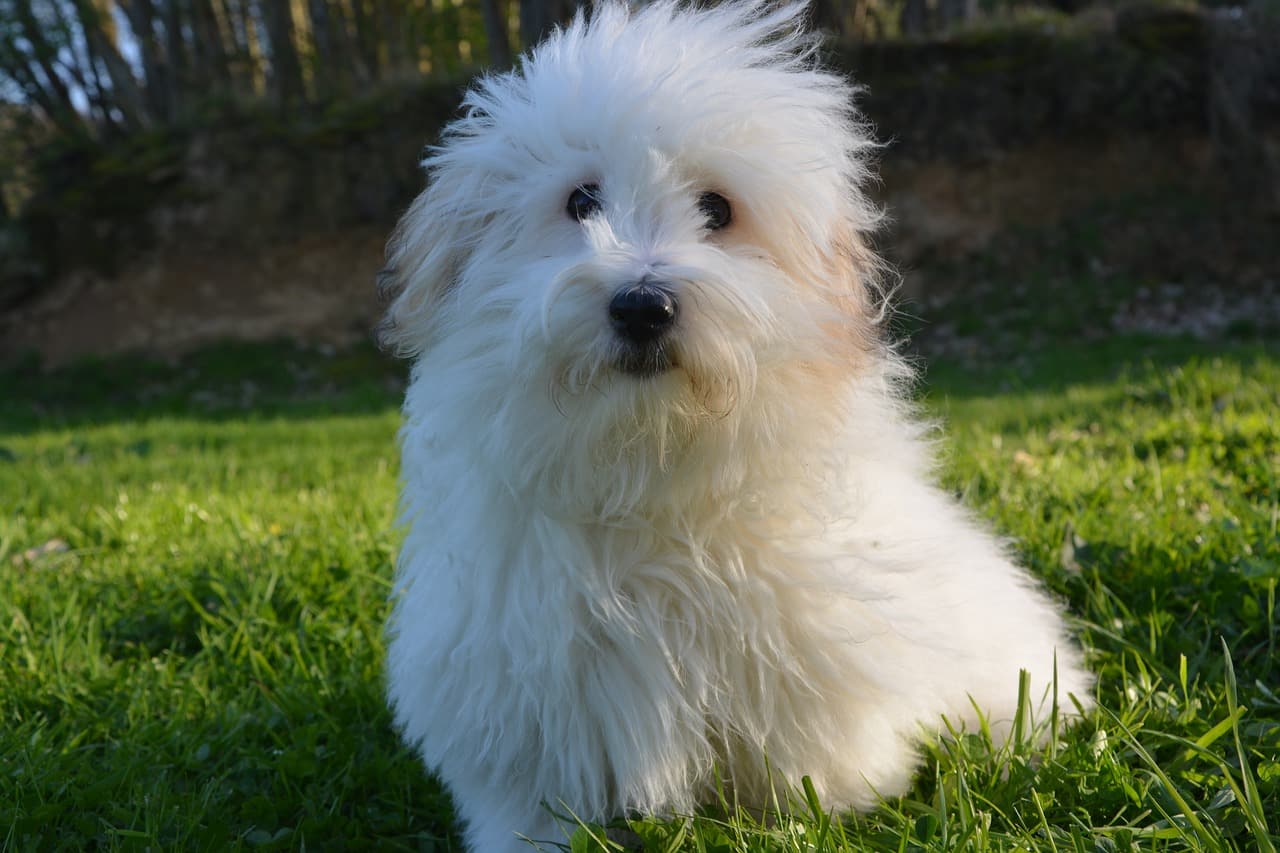 The Coton de Tulear was bred to be an affectionate dog breed that thrives on being fussed and handled. The Coton’s intelligence and eagerness to learn makes this breed very easy to work with. The Coton is a happy, affectionate, and gentle breed that is always willing for a cuddle and making more friends. On the other hand, Coton’s are forever vigilant and a top notch watch dog.

The Coton de Tulear was bred to be an affectionate dog breed that thrives on being fussed and handled. The Coton’s fluffy white coat, diminutive size and a demanding facial expression begs you to pick it up and allow it to nestle in your lap.

A well-proportioned Coton must always have a body that is longer then it is high at the withers. It’s slightly spherical skull is almost double the length of its muzzle. The Coton’s head is also slightly shorter than half the length of the body. When viewed from above its head has a triangular shape. On the tip of the Coton’s short straight muzzle lies a small black nose with wide nostrils. The Coton’s black lips fit tightly around the mouth, covering a set of well aligned teeth that are allowed to close into a scissor, pincer or inverted bite as long as there is no loss of contact. It is acceptable for this breed to be missing both the first premolar and the third molar. The eyes are dark, round and set wide apart and the dog’s pendulous ears are triangular and set high on the skull. Some grey or red-roan shading on the ear is acceptable.

The tail is set low and is either carried low while at rest, or held curved over its back when the dog is excited or active. When standing, all the limbs of the body should be straight and should meet the ground at a right angle. Even though the Coton’s limbs are relatively thin, they shouldn’t be weak. The Coton de Tulear’s stride should be energetic and flowing but isn’t required to cover much ground.

The Coton’s luxurious coat is its most distinguishing feature. True to its name this breed’s coat feels like soft, dense cotton and should never feel harsh or tough to the touch. The Coton’s breed standard allows for the dog’s coat to have a slight wave.

The colour of the Coton’s coat is pure white, with some light shades of red or gray allowed on the ears. Some isolated red or grey hairs are even allowed on parts of the body as long as they do not interfere with the Coton’s solid, brilliant, white coat.

A Coton de Tulear needs daily grooming, and therefore this breed is not suggested for individuals who wish for a low maintenance dog. Coton de Tulears also need regular nail clipping to avoid problems such as excessive growth or breaking. It is also important for owners to regularly clean a Coton’s teeth and ears in order to avoid infections. The Coton’s minimal shedding is an added boon for those looking for a hypoallergenic dog breed.

The Coton de Tulear is generally considered to be a very healthy and lively breed. However, there are a number of diseases that might show up in some Coton individuals. These are:

It is recommended for young dogs to visit a veterinarian to get their knees examined in order to determine if the dog is prone to patellar luxation. Special care should be taken in order to properly manage the Coton’s oral and aural hygiene to avoid future problems.

At Newdoggy.com we promote puppies coming from reputable breeders, who use genetic testing and good breeding practices to remove genetic conditions from their breeding lines. Newdoggy.com’s Health Guarantee certifies that all promoted puppies are in good health.

It is very easy to fall for the Coton de Tulear’s adorable look and disposition. It is suggested for Coton owners to be self-aware and avoid being over indulging these dogs since this has often led to the development of Small Dog Syndrome. Giving in to a Coton’s demanding nature, and allowing them to call the shots on various aspects of your life is the most decisive path towards an unsatisfactory relationship with your dog.

The Coton’s intelligence and eagerness to learn makes this breed very easy to work with. Given the Coton’s work willingness to please, it is a big pity that the breed’s stature does not allow for it to be competitive in any dog sports except for obedience training. If an owner has no interest in competition, one might still find dog sports such as agility training to be enjoyable activities to do with their Cotons. As with all dog breeds, it is suggested to start housebreaking, and teaching the dog some basic commands as early as possible. Inexperienced dog owners would do well to enrol their dogs in obedience classes as soon as their dogs are old enough for such training.

The Coton de Tulear’s big heart makes up for its diminutive stature. The Coton is a happy, affectionate, and gentle breed that is always willing for a cuddle and making more friends. Since this breed is considered to be gentle and good with animals and children, people often make the mistake of thinking that Cotons are a push over with strangers. Coton’s are forever vigilant and keep a keen eye and ear for everything that is going on in their vicinity. This makes them a top notch watch dog. Unfortunately, what they have in vigilance, they lack in stopping power. Their small stature and their very sociable predisposition render them useless at keeping intruders out.

Coton de Tulears usually have no problems adapting to apartment life. This is because they are usually very active indoors and therefore do not need access to a garden as long as they get some playtime during their daily grooming routine. The breed is also considered to be hypoallergenic, which would make it an ideal candidate for households with family members suffering from allergies.

Please fill in the below form and we will let you know when a new Coton de Tulear litter arrives.