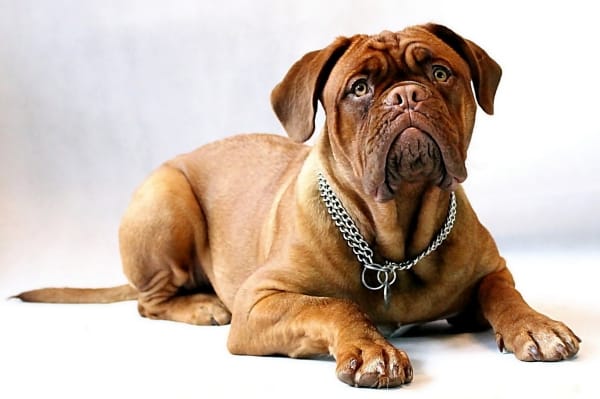 Big and stocky, with a short droopy muzzle and reddish fur, the Dogue de Bordeaux may look scary at first, but is a real sweetheart. The Dogue de Bordeaux is mild-mannered and friendly, but also fiercely loyal and protective of their family. They are very patient, even with curious children, but Dogue de Bordeaux puppies tend to enjoy rough-housing and take a while to grow up and calm down. They tend to drool and can be flatulent. The Dogue de Bordeaux can live quite comfortably in apartments, and only needs moderate exercise; just make sure that they don’t get bored, as they make destroy the sofa in a bid to entertain themselves!

This mastiff breed is stocky, and short for a large dog. The breed has a broad and very large head, with plenty of wrinkles, and wide-set eyes. The Dogue de Bordeaux is a brachycephalic breed, meaning that the muzzle is short, the face a little flattened in appearance. Despite being short, the muzzle has a powerful look to it, with teeth meeting in an under bite, and a droopy upper lip. The ears are small and hang down by the sides of the dog’s head. The Dogue de Bordeaux’s wrinkled neck has a conspicuous dewlap formed by the thick skin folds. The chest is deep, and the legs of the Dogue de Bordeaux are well-muscled.

The Dogue de Bordeaux has a short but soft coat, with a beautiful reddish colouring and a darker mask marking. The coat can be any colour from fawn to mahogany red. The breed often has white markings on the chest and tips of toes (for show dogs, white markings anywhere else are a fault). This breed sheds moderately, but is very easy to groom.

The Dogue de Bordeaux is generally a healthy breed; however they are prone to a few health conditions:

The Dogue de Bordeaux is sweet natured, in spite of its imposing appearance. Adults tend to be calm and patient, though younger Dogues de Bordeaux are often rambunctious. They can be a little stubborn, so when training your Dogue de Bordeaux, you will be to be patient and consistent. As you start to develop a working relationship with your dog, you’ll usually find him/her quite willing to work. Dogues to Bordeaux often excel in canine activities such as carting, search and rescue, and obedience trials.

The Dogue de Bordeaux looks fearsome, but is actually very mild mannered and even tempered. This breed tends to be friendly and loyal, but makes an excellent guard dog due to its imposing appearance and distrust of strangers. They are good family dogs, as they are patient and get on with children. Adult French Mastiffs are generally calm and quiet, but youngsters are often quite a handful. Young Dogues de Bordeaux tend to be energetic and rowdy, and will need patient training to teach them proper manners. Early socialisation will help your Dogue de Bordeaux get on with people and other animals.

The Dogue de Bordeaux is a loveable giant, but has some foibles. They tend to drool and can be flatulent. They can live quite comfortably in apartments, and only need moderate exercise, but they can be destructive if bored, and a boisterous youngster may accidentally cause damage. If not socialised properly, they can be aggressive towards people and other animals: be sure to socialise your pup!

Please fill in the below form and we will let you know when a new Dogue de Bordeaux litter arrives.