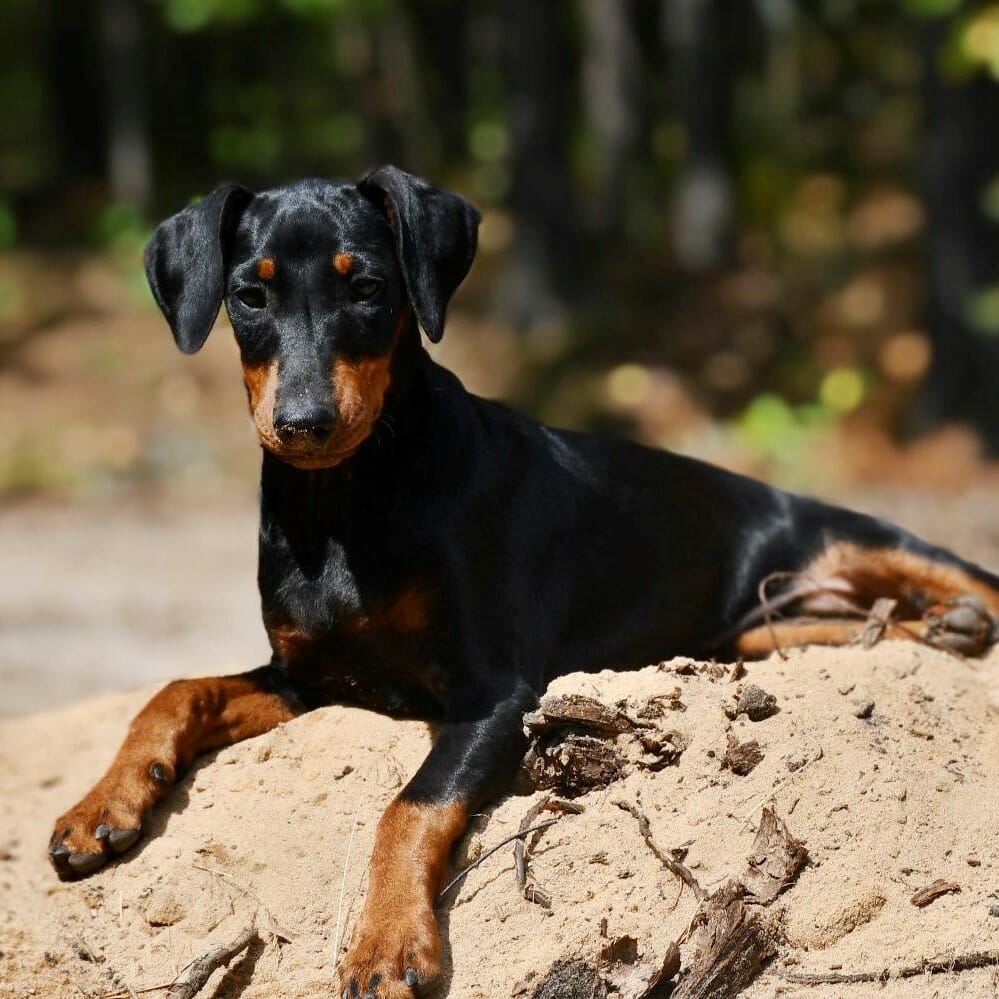 A close relative of the Doberman Pinscher, the German Pinscher breed is a sleek medium-sized dog. Their coats are typically black and tan, but colours such as blue and fawn are also found. Their natural ears are floppy, and the natural tail is long. The German Pinscher is playful and energetic, and can make good family dogs if properly exercised and well socialised.

45-50cm Both for Males and Females

14-20kg Both for Males and Females

A predecessor of the Doberman, the Rottweiler, and the Schnauzer; the German Pinscher is a medium-sized dog with a square, yet graceful look. The German Pinscher has a long head, with a flattened forehead and a wedge-shaped muzzle. The dark lips fit tightly to the jaw; the latter of which meet in a scissor bite. The eyes are oval-shaped and dark. The ears are naturally high-set and floppy; cropping was traditional but is now banned in many regions for animal welfare reasons.

The curved neck leads down to a slightly sloped and short back. The dog’s chest is fairly wide. The body is sleek and well-muscled. The German Pinscher’s tail is naturally shaped like a sabre or sickle (docking was traditional but is forbidden in many regions). The legs are straight and strong, with short round feet and black nails.

The German Pinscher has a short shiny coat, with dense hair. German Pinschers are often black and tan, but many are “deer red” (a term which covers a variety of shades of red-brown). Black saddle markings, a black trace, or a pale coat are all considered faults in the show ring. The German Pinscher sheds moderately and is very easy to groom.

Fortunately the German Pinscher is generally a healthy dog, but the breed is prone to a few health conditions:

At Newdoggy.com, we recommend that you buy your puppy from reputable breeders, who use genetic testing and good breeding practices to remove genetic conditions from their breeding lines.

The German Pinscher is a very clever breed. While this means they can learn a lot quickly, it does mean that they may take advantage of an inexperienced owner! The German Pinscher has no trouble causing mischief if left unchecked. A firm but fair approach is very important. If you lack experience, do consult a dog trainer for advice. A good trainer can use the German Pinscher’s natural energy and intelligence to their advantage.

Good-natured and playful, the German Pinscher has gained popularity in recent years for its temperament. They are loyal and loveable dogs that love their families deeply. They can be mischievous and may try to take advantage of an inexperienced dog owner.

A German Pinscher will certainly keep you on your toes! If you remain firm, you will find yourself with an utterly devoted dog. As they were used as guard dogs, German Pinschers can be distrustful of strangers. If socialised properly, this distrust should not lead to aggression.

This is a lively and playful breed. This high-energy dog needs a lot of exercise to keep him/her happy and healthy. A lack of exercise will make your German Pinscher frustrated, bored, and more likely to cause mischief. While the German Pinscher can live in an apartment, this isn’t ideal. Your German Pinscher will be happier in a home with a garden or large yard to play in (make sure the fence or wall is escape-proof!). Although the German Pinscher tends to bark to alert you that something is amiss, this breed does not bark incessantly or without reason.

If you are interested in canine sports, the German Pinscher is an excellent choice. The breed is a great all-rounder and has proved successful in many sports, such as tracking, canine agility, and obedience.

The German Pinscher can be a good family dog, but does better with older children or with teenagers. As they have a strong prey drive, it is better not to keep them with other pets such as cats; however, if introduced properly they may be able to live with another dog.

Please fill in the below form and we will let you know when a new German Pinscher litter arrives.