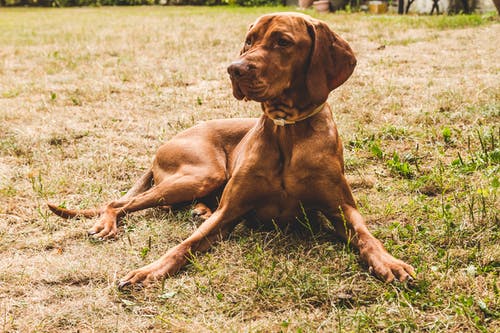 An aristocratic retriever and gun dog, the Vizsla is a handsome medium-sized Pointer. The most typical feature of the Vizsla is its beautiful golden-red colour. The Hungarian Vizsla has sometimes been nicknamed the “Velcro” dog, because they love to attach themselves to people. They will happily cuddle up on your lap or next to you on the sofa: Vizslas just love to be with people! The Vizsla is an excellent family dog.

An aristocratic retriever and gun dog, the Vizsla is a handsome medium-sized Pointer. The Hungarian Vizsla is a short-haired dog with a hearty but light lean build. Despite this, their muscles are well defined. The Vizla’s ears are long and rounded, set quite low on its lean and muscular head. The neck is muscular, but doesn’t look bulky due to its length. The tail is long in its natural state. The Vizsla typically holds its tail in a horizontal position, wagging it furiously as it runs through the undergrowth.

The Hungarian Vizsla has a short, dense coat. The most typical feature of the Vizsla is its beautiful golden-red colour. The fur can be any shade between rusty red and red-gold, though mahogany and pale yellow are not accepted colours. Saddle markings on the back and small white markings on the chest, neck and tail are acceptable.

While the Hungarian Vizsla is generally a healthy dog, they are prone to a few health conditions:

At Newdoggy.com, we recommend that you buy your Miniature Schnauzer puppy from reputable breeders, who use genetic testing and good breeding practices to remove genetic conditions from their breeding lines.

The Vizsla is energetic but very intelligent. They are generally very eager to please, but you should try to socialise your Vizsla from an early age to avoid problems later in life. Since Vizslas are generally energetic dogs, it is worth considering a training method that takes advantage of their boundless energy; for example, you might consider taking them to canine agility classes. They respond very willingly to training, so are also good candidates for canine obedience classes.

The Vizsla needs a calm but firm trainer, who understands their sensitive temperament and can direct them without harshness.

The Hungarian Vizsla has sometimes been nicknamed the “Velcro” dog, because they love to attach themselves to people. They will happily cuddle up on your lap or next to you on the sofa: Vizslas just love to be with people! The Vizsla is an excellent family dog, though younger Vizslas tend to jump around, and could accidentally knock small children over in their excitement.

Vizslas tend to be mouthy, especially towards people’s hands, but this can be solved by providing your Vizsla with a box of toys for him to pick up and carry or chew.

Early socialisation is essential for this breed. Vizslas can be a little suspicious or shy of new people and situations, but early socialisation will give them confidence and prevent them from become nervous or timid as they grow up.

The Hungarian Vizsla breed is not a dog for couch potatoes. He needs regular exercise and plenty of mental stimulation. A bored Vizsla will happily destroy your home, chewing holes in the sofa and digging up the garden. You need to take your Vizsla running, walking or biking. You could also get involved in a sport such as tracking or agility. Vizslas also love to swim, which is a great outlet for all their energy.

Due to their affectionate nature, Vizslas can be a bit clingy. They often suffer from separation anxiety, and will bark and chew up the place if left alone for too long. The Vizsla can also be a little slow to house train.

Please fill in the below form and we will let you know when a new Hungarian Vizsla litter arrives.