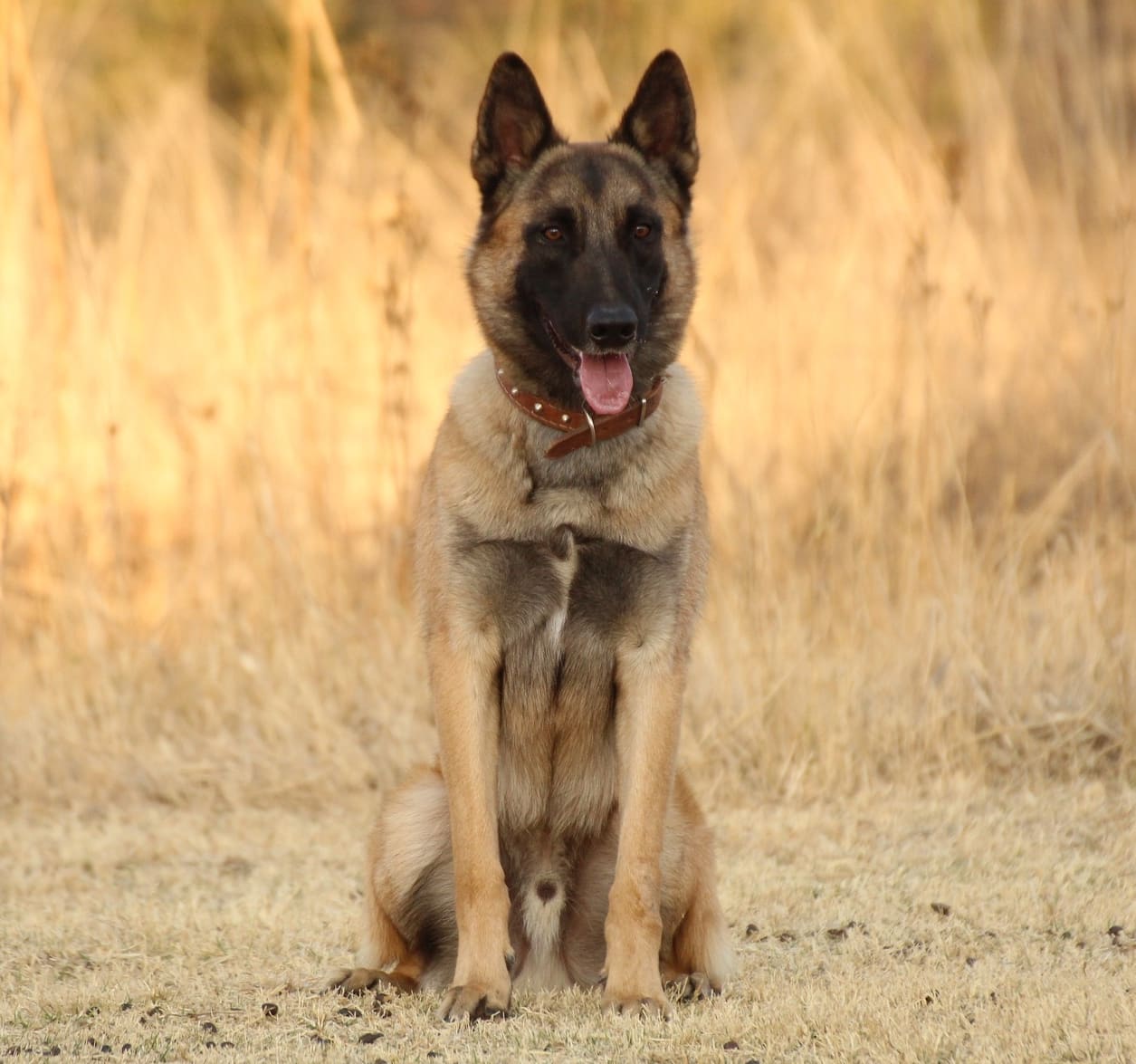 Sleek and slender, the Belgian Malinois is sensitive, alert, and clever. With early socialisation and consistent training, the Belgian Malinois often shines in canine sports. They are eager to please and keen to learn, and if you’re able to give them the space, exercise, and companionship that they need, they will reward you with loyalty and love.

At first, you might mistake the Belgian Malinois for a German Shepherd, as they have similar colouring: fawn or tan with black markings. On closer inspection you can see the differences in their build. The Malinois is smaller with a lighter build. They have a more square shape compared to the German Shepherd’s sloped appearance.

The Malinois has a pointed muzzle, with upright ears, and teeth that meet in a scissor bite. The head has a more refined appearance than that of the German Shepherd. They have deep chests and cat-like feet. The eyes are medium sized and almond shaped.

The Belgian Malinois has similar colours to the German Shepherd: tan or fawn (though in the Malinois reddish and brown coats also occur), with black markings on the body and a black mask on the face. Each hair has a black tip.

The Malinois has short fur, and a double coat that has an outer, weather-resistant layer, and a softer inner layer. The longer fur around the neck resembled a ruff or collar. The Belgian Malinois sheds heavily twice a year, but be prepared for almost constant shedding.

While the Belgian Malinois is generally a healthy dog, they are prone to a few health conditions:
• Hip dysplasia
• Elbow dysplasia
• Progressive Retinal Atrophy (PRA)
• Sensitivity to Anaesthesia
• Skin allergies
At Newdoggy.com we promote reputable breeders, who use genetic testing and good breeding practices to remove genetic conditions from their breeding lines. Newdoggy.com’s Health Guarantee certifies that all promoted puppies are in good health.

The Belgian Malinois is sensitive, alert, and clever. This is a dog that responds well to positive reinforcement and fun training sessions: the Malinois loves to play!
With early socialisation and consistent training, the Belgian Malinois often shines in canine sports. They are often used as police dogs or guard dogs due to their sensitivity and responsiveness. They do have a strong instinct to herd, so if you don’t use your Malinois for herding work, he or she may try to herd people by nipping at their ankles or chasing and circling them: you should teach your dog not to do this. You can focus this energy and intelligence during training and exercise.

The Belgian Malinois is clever and eager to please, but has a strong instinct to herd and guard. Early training will help to prevent these instincts from turning into behavioural problems. Early socialisation will prevent your Belgian Malinois pup from becoming shy or overly sensitive.

The Belgian Malinois can be reserved with strangers, but is very affectionate with family. They are watchful and alert, and will try to protect their family. With some work and good socialisation, they can be trusted around other pets such as cats. As they are sensitive dogs, they need to be handled firmly but gently. They are not recommended for first time dog owners due to their sensitive nature.

The Belgian Malinois is not an apartment dog. They are energetic and thrive in spacious environments. They also hate being alone, and want to be included in the family.

On the plus side, they are very affectionate and are good with children and, with some training, even other pets. The energetic Malinois needs plenty of exercise and play time. This breed often excels in obedience classes, canine agility, and other canine sports.

Please fill in the below form and we will let you know when a new Malinois litter arrives.