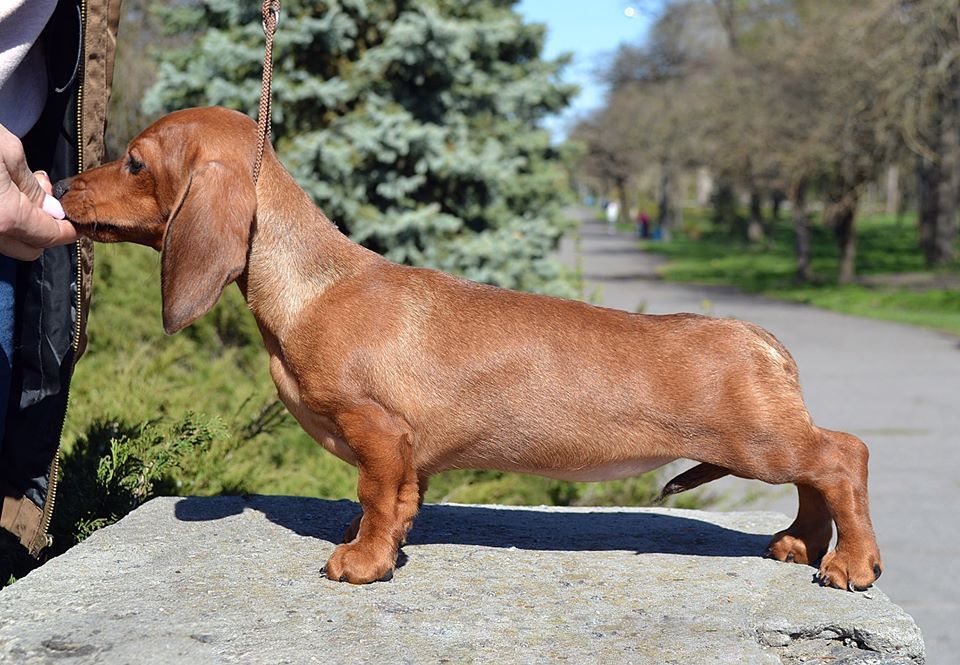 This breed is nicknamed the sausage dog, which is an accurate description of the Dachshund’s shape. The Dachshund is low slung with short legs, with a surprisingly muscular body. They have long muzzles, floppy ears, and an alert, clever expression. The chest is barrel like, providing room for large lungs: this gives the Dachshund a loud, booming bark.

In the USA, Great Britain, and other Anglophone countries, there is only one size of miniature Dachshund; however in Germany there are two variants. These are miniature (zwerg) and rabbit (kaninchen). A Dachshund’s classification as miniature or rabbit is based on their chest circumference. The rabbit Dachshunds are smaller than the FCI’s Miniature Dachshunds.

The Miniature Dachshund can be longhaired, wirehaired, or smooth-coated. Their fur colour and pattern is variable. These colourations include red, cream, black and tan, chocolate and tan, blue and tan, isabella and tan, brindle, merle, sable, and piebald (the AKC does not accept double merle or piebald in their breed standard). Dachshunds shed moderately, but are very easy to groom on the whole. Smooth Dachshunds may feel the cold in the winter and might need a coat to keep warm. Longhaired Dachshunds have slightly wavy fur that needs daily brushing to avoid tangles. Wirehaired Dachshunds have a bushy appearance, with a beard and big eyebrows.

While the Miniature Dachshund is a fairly healthy dog, they are prone to a few health conditions:

The Miniature Dachshund is certainly an intelligent dog breed, but they have a reputation for being stubborn. They are thought to be difficult to housetrain, so you’ll need to be both patient and persistent, especially with a puppy. Crate training can be very useful for house training your Miniature Dachshund.

Early socialisation is very important for the Miniature Dachshund, as this breed can become very protective of its humans.

Miniature Dachshunds love to be around their humans, and will follow you “helpfully” through the home. They can be reserved with strangers, and may bark at them; this is not always a desirable trait, but does make them excellent guard dogs. These clever dogs were originally bred to hunt badgers, and retain an independent, brave, and energetic nature from their hunting days.

Miniature Dachshunds are confident, though sometimes a little stubborn, but they are ultimately very sweet-tempered, playful dogs, and do well in most homes. They tend to bond strongly with one person, so socialisation is important to prevent your Miniature Dachshund from becoming over-protective or aggressive.

Be warned: Miniature Dachshunds LOVE to dig! As they were originally bred for badger hunting, Miniature Dachshunds have a strong urge to dig, and they are very good at it. They are also very tenacious, and will persist when they want something; for example, they may pester you for attention or treats. They also have a strong hunting instinct, and may go after small animals; it’s probably not a good idea to keep hamsters or gerbils when there’s a Dachshund on the prowl. Miniature Dachshunds can be vocal, and have a loud, booming bark; fortunately they are clever enough that it should be possible to train them to understand the “quiet” command.

If you are ready to work through these challenges, you will find that owning a Miniature Dachshund can be very rewarding. Despite their small stature, they are energetic and are surprisingly good at canine sports such as field trials and canine agility. Regular exercise is very important to keep your Miniature Dachshund fit and happy. They are prone to back problems (such as slipped discs), so don’t let your Dachshund jump from high place. You should also hold your Miniature Dachshund so as to properly support their back.

Please fill in the below form and we will let you know when a new Miniature Dachshund litter arrives.