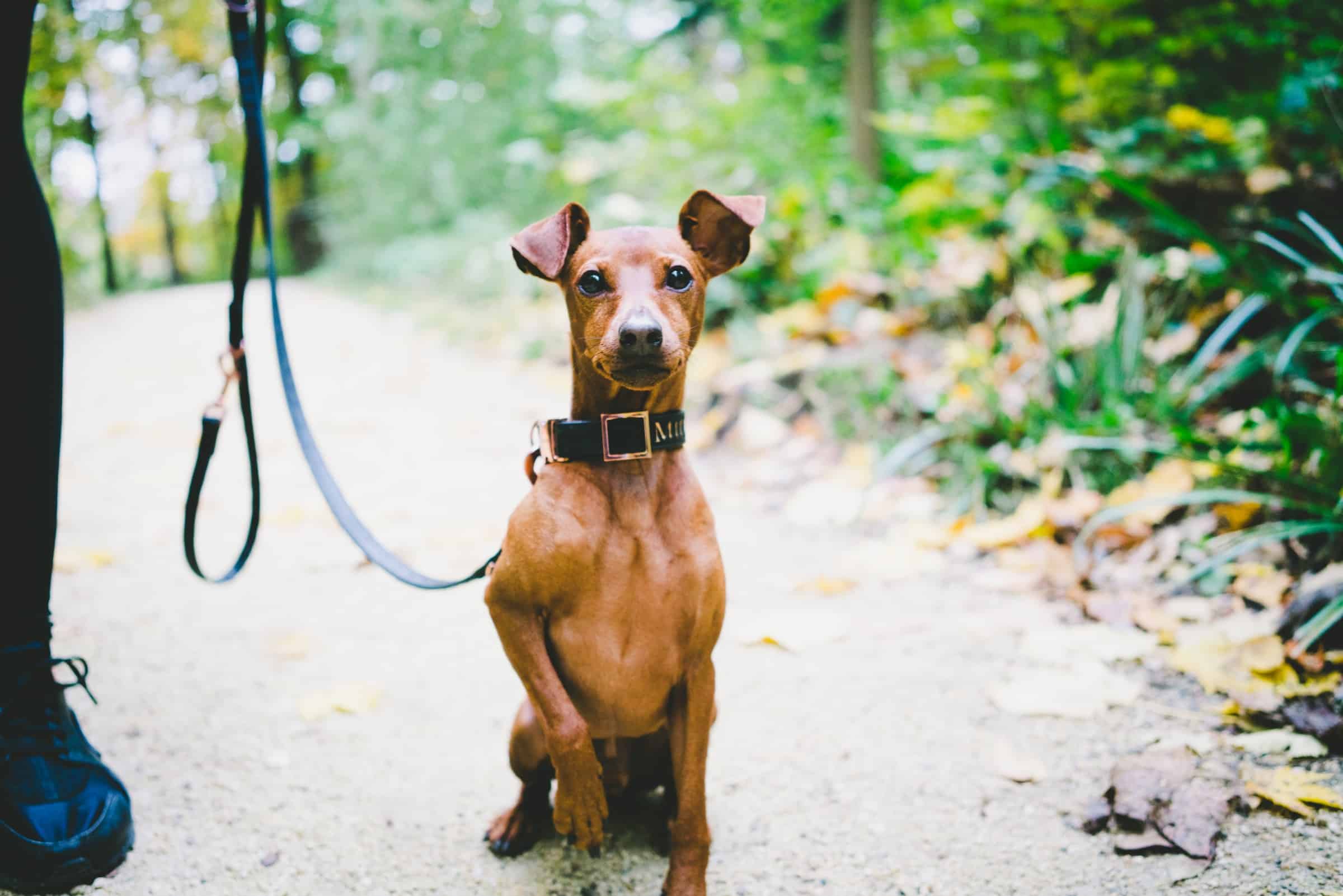 The diminutive Miniature Pinscher looks like a miniaturized version of the German Pinscher. Miniature Pinschers, despite being considerably smaller, still have a very well balanced constitution since they boast similar body proportions to their full sized cousins. The Min Pin is compact and has a solid, squarish body with a strong elongated head that is half as long as the dog’s back. Despite the Miniature Pinscher having an elongated head, the back of the skull does not end in a protrusion but should blend smoothly with the rest of the neck. The forehead is flat and parallel with the bridge of the muzzle, with only a slight stop interrupting the two in a clearly defined brow. The muzzle is characterised by a straight bridge and ends in a blunt, wedge-shaped profile, tipped by a well-developed, black nose. The Miniature Pinscher’s black lips fit tightly around the jaws and finish at the sides of the dog’s face in closed corners. The Miniature Pinscher’s jaws and strong masticatory muscles close in a firm, strong scissor bite. Although the dog’s bite should be strong, the cheek muscles should never be overly pronounced, always displaying a certain harmony with the rest of the head without compromising power. This breed’s dark, oval eyes should neither be too close nor be far apart, and should be accompanied by two pairs of black pigmented, tight-fitting eyelids. The ears are triangular and should nest high on the dog’s skull. Prick ears or dropped ears are both accepted in the breed standard. The head is connected to the rest of a body through a noble, curved neck. The neck shouldn’t be too short and should blend smoothly with the rest of the body.

The body of the Miniature Pinscher is built in a way to avoid having any sharp edges. The back of the dog is short, stiff and strong and slopes gently from the back’s highest point, the dog’s withers, until it ends at the base of the dog’s tail. The distance between the last rib and the hip is very short resulting in the Miniature Pinscher’s strong loins. The dog’s buttocks are round and blend smoothly into the tail. Miniature Pinschers have broad, deep chests and the ribcage is sprung in a way to give the dog’s thorax an oval shape when viewed from the front. The point of the sternum should be pronounced and visible. The belly and flanks of the dog should only be slightly tucked in, to form a smooth curve with the rest of the dog’s underside. The tail should be carried upwards in a sabre or sickle like fashion.

The front limbs are placed well apart and are attached to the body by sloping shoulders that attach to the upper arms at a 95 to 100 degree angle. The elbows are held close to the body but should never bow outwards or buckle inwards. The distal forelimbs are muscular and look straight when viewed both from the front and from the side. The front limbs end in strong firm wrists; strong pasterns that come at a slight angle in relation to the ground; and round, short, cat-like paws that sport durable pads and strong, short, black nails.

The hind limbs are also set well apart and start off as strong, broad, moderately long upper thighs. Like the elbow, the stifles and the hocks should not bow outwards nor buckle inwards. The lower thighs should be long, strong and sturdy resulting in a strong, firm, angulated hocks. The hind legs end in vertically set metatarsals and cat like hind paws that are slightly more elongated than those at the front.

The Miniature Pinscher’s coat is made out of short, dense, smooth, shiny hairs that collectively give the dog’s coat a glossy sheen. The coat can come in black and tan, deer red, reddish-brown, and dark red-brown. The skin attaches tightly to the body of the dog giving the dog a sporty appearance.

This dog is easy to groom needing only a light brush with a bristle brush every now and then. The fact that this breed sheds little, also makes it one of the most ideal house dogs one can own.

The Miniature Pinscher is generally considered to be a healthy and lively breed. However, there are some breed associated diseases that you should be aware of. These are:

It is important to exclude dogs suffering from Patellar luxation and LCP from breeding programmes. It is ideal for these individuals to be spayed or neutered.

At Newdoggy.com, we recommend that you buy your Miniature Pinscher puppy from reputable and serious breeders. Good breeders resort to genetic testing and good breeding practices to weed out genetic conditions in their breeding lines.

It is important to establish clear rules and boundaries in order to allow your Min Pin to develop into a well-balanced dog that is a pleasure to be around. Failing to do so will only allow your dog to slide down into a bottomless pit called Small Dog Syndrome. It is very common to dismiss a small dog’s misbehaviour due to its size and many people do not realise that their Miniature Pinscher is suffering from Small Dog Syndrome until it is already very late, making things even more difficult to reverse. It is therefore suggested to start training your Min Pin at an early age, all the while treating your Miniature Pinscher as if it is a regularly sized dog. It will soon become apparent that these dogs are sharp and are very willing to learn new things. One could enrol these dogs in obedience or agility classes in order to make better use of this breeds willingness to learn.

The Miniature Pinscher is a feisty dog with enough spirit to fill a hundred dogs. A Miniature Pinscher is lively and confident and is well known for being evenly tempered making it a great addition to any family and a loyal companion to the people who need one. The Min Pin is a medium energy breed that can be adequately exercised through play or moderately long walks.

Please fill in the below form and we will let you know when a new Miniature Pinscher litter arrives.