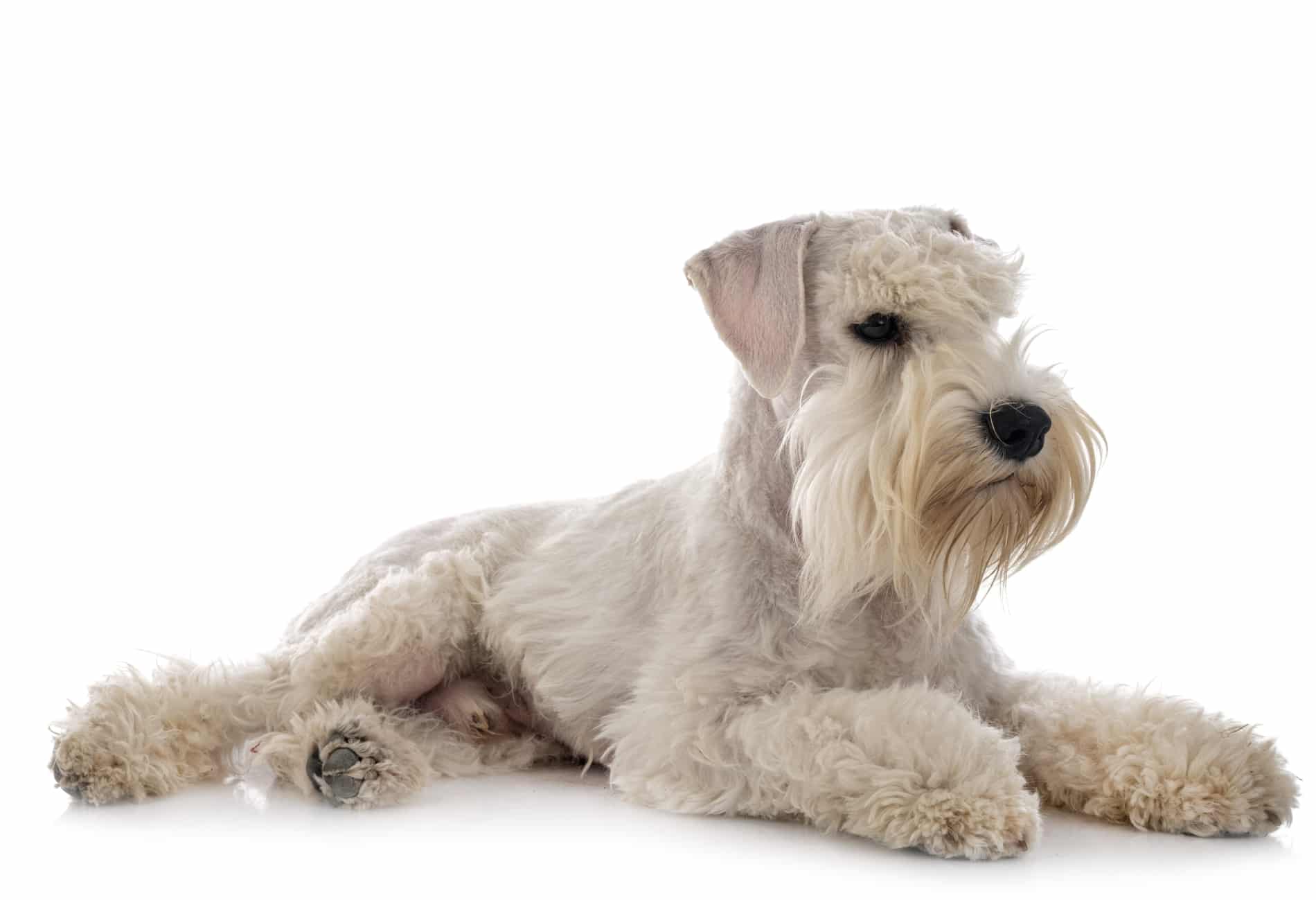 The Miniature Schnauzer is a small but sturdy fellow. These dogs have a square look, with a strong rectangular head, complete with a beard and bushy eyebrows. The muzzle is blunt at the end, with a black nose. The eyes are small, with a beautiful deep brown colour. The Miniature Schnauzer’s ears are small and V-shaped in their natural shape; although ear cropping has been traditional for this breed, it is illegal in some areas. Schnauzers’ tails were also traditionally docked – again, this is illegal in some areas.

The Miniature Schnauzer has a double coat, with a soft undercoat and a wiry outer coat. Although they are sometimes described as non-moulting dogs, this isn’t technically true: they do shed, but this is minimal.

They generally need to be clipped to keep their fur in neat condition: a typical clip for a Miniature Schnauzer involved keeping the fur on the ears, legs, belly, and face, and clipping the rest of the body.

The Miniature Schnauzer has a handsome bushy beard and moustache, and eyebrows that Albert Einstein would be jealous of.  They also have cat-like feet which are rounded and short, with black paw pads.

One of the most common coat colours is salt and pepper, where the body is grey with white points. Miniature Schanuzers can also be black and silver, black, or white. White-coated Schanuzers aren’t accepted by all clubs: the Canadian Kennel Club and the American Kennel Club will not accept white Miniature Schnauzers for conformation showing.

However, the Fédération Cynologique Internationale will accept white Miniature Schnauzers: great news if you’re interested in showing your dog.

While the Miniature Schnauzer is generally a healthy dog, they are prone to a few health conditions:

At Newdoggy.com, we recommend that you buy your Miniature Schnauzer puppy from reputable breeders, who use genetic testing and good breeding practices to remove genetic conditions from their breeding lines.

The Miniature Schnauzer is intelligent, which is great for dog training; however, this intelligence is coupled with stubbornness and a certain level of self-confidence (both common terrier traits). They are feisty and strong-willed dogs, and need calm but firm handling. Be prepared for an energetic and clever little dog who will keep you on your toes; however, that same energy and intelligence can be channelled into their training.

The Miniature Schnauzer is a typical terrier: full of vigour and energy, with a certain attitude of self-confidence, combined with affection and a desire to please. They can be a little territorial, often barking or acting aloof with strangers (both humans and other dogs) until they get to know them better. They tend to be suspicious with strangers; do not encourage this trait, or your Miniature Schnauzer will bark at every strange human and dog they see.

Miniature Schnauzers can be aggressive to other dogs, and to animals such as cats and small pets (due to their roots as ratting dogs), so this might not be the best breed if you want other pets.

Although they are feisty and often prone to bossiness, if handled calmly and firmly and socialised at an early age, the Miniature Schnauzer makes a great family pet. They are very affectionate dogs, and will happily play or walk with you and your kids.

They are somewhat high maintenance dogs in terms of grooming. Brush your Miniature Schnauzer daily with a wire brush, and take him for a clip twice a year.

Please fill in the below form and we will let you know when a new Miniature Schnauzer litter arrives.