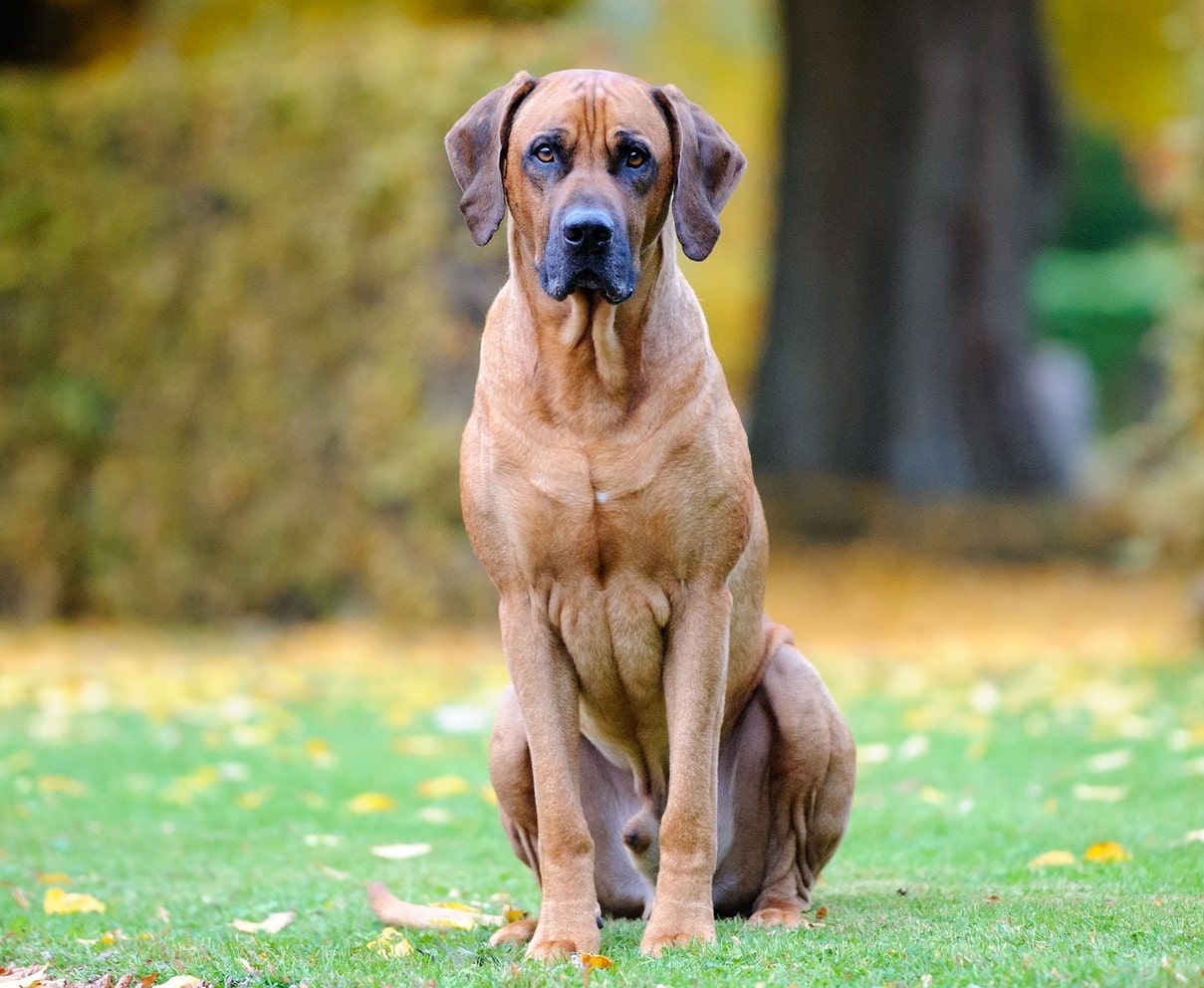 The Rhodesian Ridgeback was originally bred to hunt lions, so these dogs are large, muscular, and athletic. The ears are floppy and quite high-set on the head. The eyes are large and almond shaped. The Ridgeback’s long neck leads down to a deep chest, a powerful back, and sloped muscular shoulders.

One of the most striking characteristics of the Rhodesian Ridgeback is the ridge that is the breed’s namesake. The ridge is formed by whorls of hair that run in the opposite way from the rest of the coat. The ridge is about 5cm wide and runs the length of the dog’s back, from just behind the shoulders to the hips. The origin of this ridge of fur is uncertain, though some theorise that it came from the original African dogs that are the ancestors of the Rhodesian Ridgeback. Some Rhodesian Ridgeback puppies are born without a ridge. These puppies are typically healthy but cannot compete at breed shows.

The Ridgeback has a sleek, glossy, short coat with a colour that is described as “wheaten”. Some Ridgebacks have some black or dark brown guard hairs, and other have small white markings on the chest and toes. Some dogs may have a dark mask marking, and other may have brown noses. Rhodesian Ridgebacks tend to shed, but this can be controlled by brushing and wiping your dog’s coat with a damp cloth about once a week.

While the Rhodesian Ridgeback is generally a healthy dog, they are prone to a few health conditions:

Although the Rhodesian Ridgeback is intelligent, the breed is strong-willed and somewhat stubborn. A confident owner and good training will bring out this breed’s best qualities; namely, loyalty and affection. Young Ridgebacks are very energetic and playful, but with the onset of adulthood, they tend to settle down and become calm, quiet dogs.

The Rhodesian Ridgeback is a loyal and intelligent dog. Although they tend to be aloof with strangers, they are even-tempered and even affectionate with their humans. They will usually ignore a strange person rather than behave aggressively, though a poorly socialised Ridgeback may be aggressive to strange animals. Despite their size and heritage as fearsome lion-hunters, the Rhodesian Ridgeback is surprisingly sensitive and should never be handled roughly. A firm but fair approach is best for these dogs.

The Rhodesian Ridgeback is surprisingly adaptable. They can live comfortably in most setting, even in apartments, providing that they get enough exercise. Young Ridgebacks are very energetic and need plenty of exercise, but as they age these dogs settle down and only need a minimum of half an hour of exercise per day.

Wherever you live, be careful to prevent your Ridgeback from escaping. These dogs are clever and get bored easily; one of their favourite things to do when bored is to escape! A high fence is needed to keep them from escaping; even electric fences won’t hold in a determined Ridgeback.

Rhodesian Ridgebacks can get along with children, but they are more suitable for families with older children, as these dogs can be a little rowdy for small children. If they are raised with other pets, Ridgebacks can get on very well with them, though may be suspicious of strange animals.

Please fill in the below form and we will let you know when a new Rhodesian Ridgeback litter arrives.