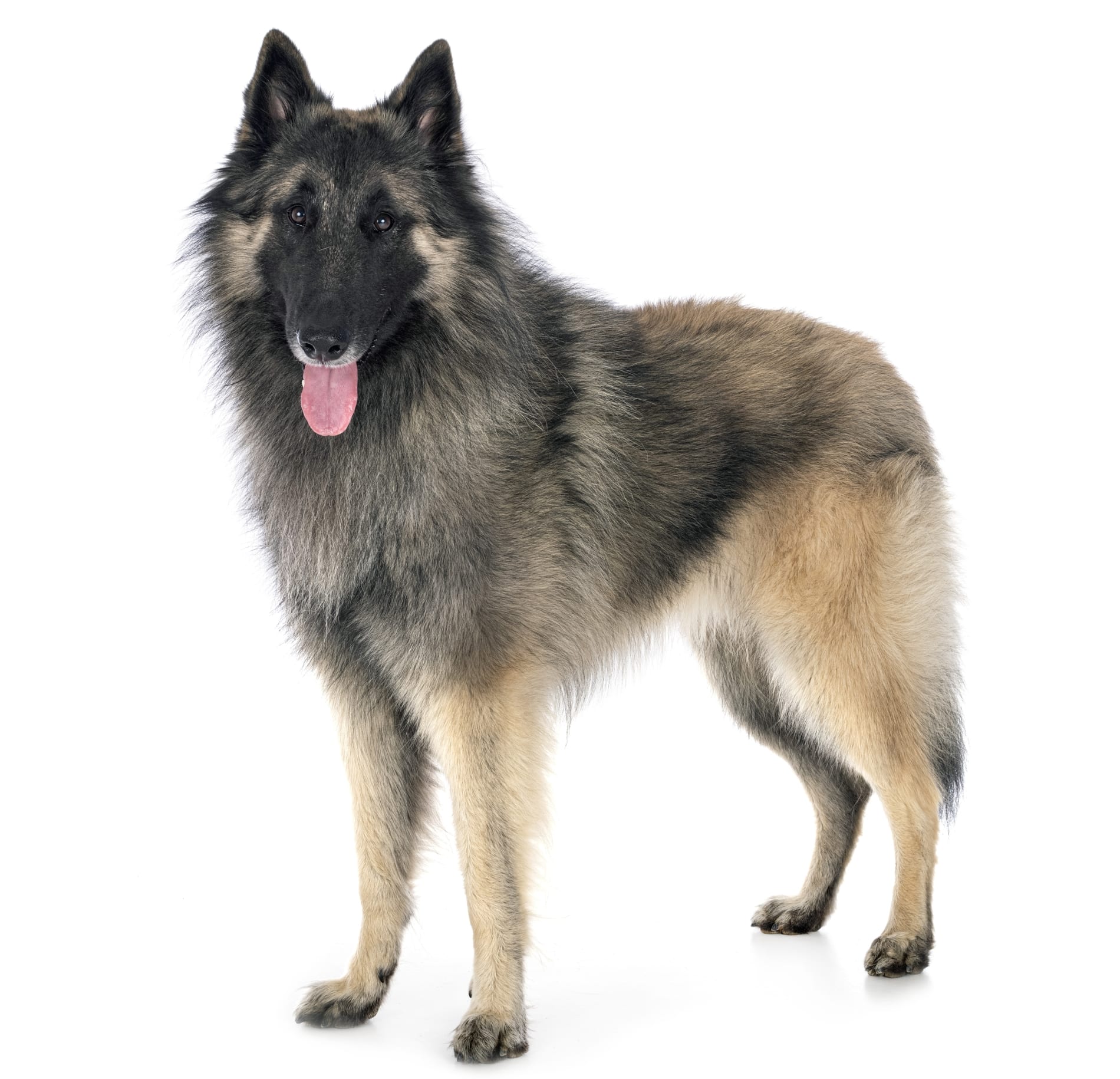 Medium sized, athletic, and strong, the Tervueren is typically mahogany coloured, with a black mask marking, and a luxurious double coat. Atheltic and intelligent, the Tervueren hates to be left alone and wants to be with its humans at all times. Their great intelligence and athleticism means that the Tervueren needs both mental and physical stimulation to prevent problematic behaviours from developing.

The Tervueren is sometimes considered to be part of the Belgian Shepherd breed; for example, the Canadian Kennel Club classifies them in this manner. Others, such as the American Kennel Club, treat it as a separate breed.

Regardless of classification, the Tervueren bears some resemblance to the Belgian Shepherd, in terms of proportions and looks. The breed is medium sized, and has a square build that is both athletic and strong. Female Tervueren’s tend to be smaller and finer. The Tervueren has a very natural appearance that reflects the breed’s character as an intelligent and courageous working dog. The eyes are almond shaped, and the triangular ears are upright and high-set on the head. The round and muscular neck leads to a level, straight top-line. The chest is deep, though not particularly broad.

The Belgian Tervueren has a beautiful double coat, with a resistant top layer and a woolly undercoat. The fur is quite short on the dog’s head, though there are longer tufts of fur to protect the openings of the ears; and front part of the legs. These dogs need to be brushed at least twice a week to remove loose fur.  The Tervueren sheds heavily about once every year, though brushing should help to remove the worst of the loose hair.

The typical coat colour is mahogany with varying degrees of black overlay, and a black mask. Depending on the country, sable or grey coats may also be accepted. The Tervueren may also have small white patches on the chest or toes.

While the Tervueren is generally a healthy dog, they are prone to a few health conditions:

The Tervueren is a very intelligent dog breed with an independent nature. These are excellent qualities, but can get your dog into trouble! Socialisation and obedience training are very beneficial for your Tervueren, as they will help your dog to develop both confidence and good manners. These are sensitive dogs and as such should not be handled roughly. The Tervueren loves to play, so turning training into a game will be a very effective teaching method for your dog.

This breed is affectionate with its family, but makes a good watchdog due to its vigilant nature. The Tervueren hates to be left alone and wants to be with its humans at all times. Their great intelligence and athleticism means that the Tervueren needs both mental and physical stimulation to prevent problematic behaviours from developing.

Early socialisation is very important to prevent your Tervueren from growing up to be a shy dog. Some Tervuerens may be nervous, so exposure to as many different people and situations as possible will help them develop more confidence, though it is best to start this process from a young age.

The Tervueren is a clever and active dog, and will be bored if given nothing to do. They were originally bred for herding, but they also excel in Search and Rescue, canine agility, tracking, protection work, obedience, and flyball. Without something to do, your Tervueren may become destructive in an attempt to entertain himself/herself. A minimum of an hour of exercise per day, plus some mental stimulation (such as a puzzle game) will make a world of difference to the quality of your Tervueren’s life. Although Tervueren’s can get on well with other pets, but they have quite a strong instinct to chase, and will be sorely tempted to pursue running animals.

See all Tervueren puppies for sale

Please fill in the below form and we will let you know when a new Tervueren litter arrives.