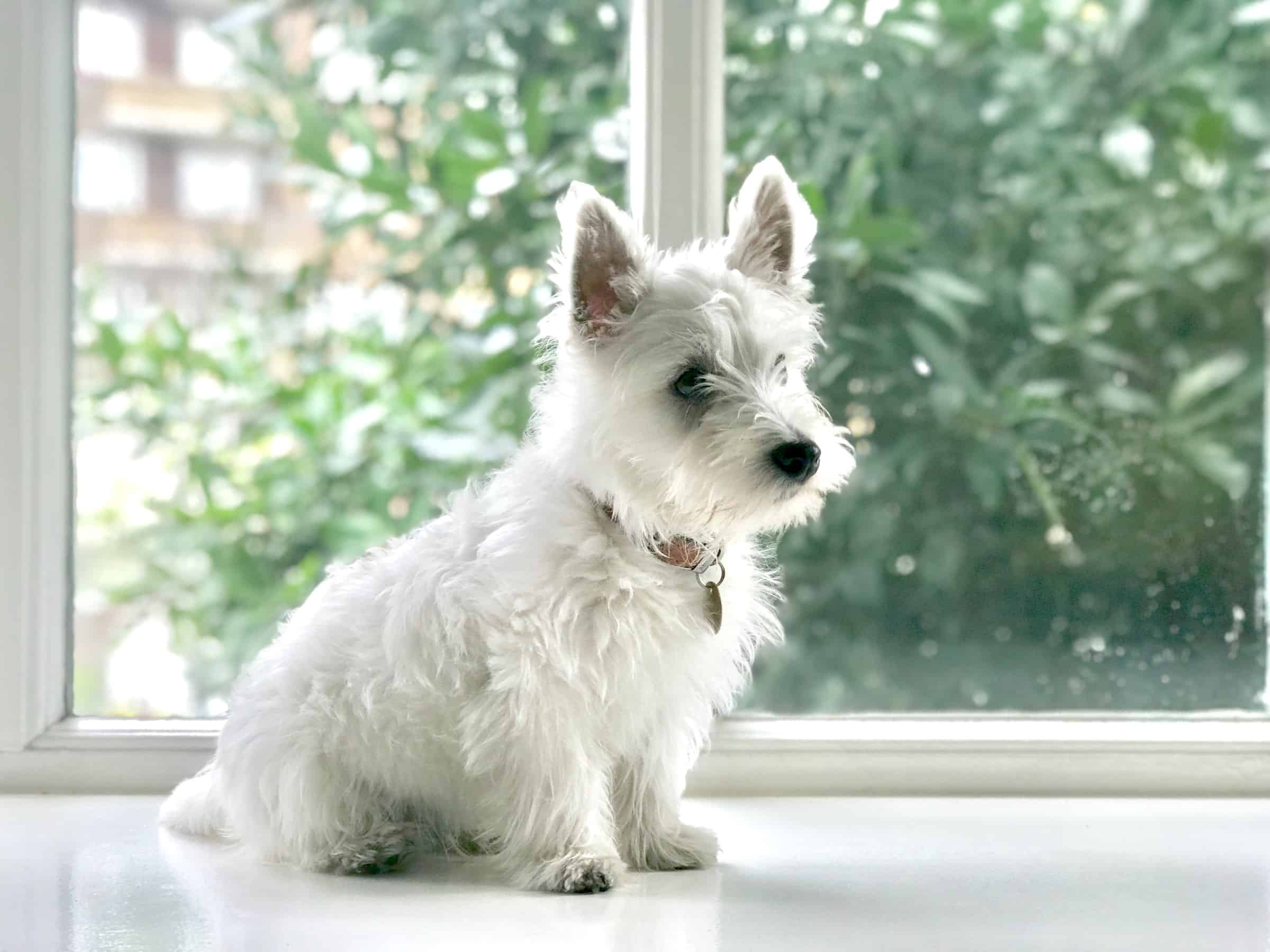 Affectionately nicknamed the Westie, the West Highland Terrier is a small and sturdy dog that was originally bred for ratting and hunting. The West Highland terrier has a thick double coat, which is always white, with a rough outer coat to protect them from the cold of their native Scotland.  The Westie has long been a favourite family pet, but remember that even small dogs need their exercise!

Affectionately nicknamed the Westie, the West Highland Terrier is a small and sturdy dog that was originally bred for ratting and working game. The Westie has pointed ears, almond-shaped eyes, and a black nose. The nose and footpads darken with age, and are sometimes pink in young puppies. The chest is deep and well-muscled, and the paws are slightly turned out to help the Westie keep its grip when moving on rocky surfaces.

The West Highland terrier has a thick double coat, which is always white (other colours are considered faults in the show ring). The outer coat is rough, to protect the Westie from the harsh Scottish climate that it was bred for, and the undercoat is soft and dense for warmth. The outer coat can grow as long as 5cm or so, giving the dog a fluffy appearance. The Westie does not shed too frequently, but if you want to show your dog you may need to invest in stripping treatment at the dog groomer. If not, then the occasional trim and frequent baths should be enough to keep your Westie neat and clean.

The West Highland Terrier is generally a healthy breed; however they are prone to a few health conditions:

At Newdoggy.com we promote puppies coming from reputable breeders, who use genetic testing and good breeding practices to remove genetic conditions from their breeding lines. Newdoggy.com’s Health Guarantee certifies that all promoted puppies are in good health.

The Westie is a quick learner who flourishes with consistent training. West Highland Terriers often respond well to positive reinforcement techniques. Harsh training often causes a Westie to act stubbornly and refuse to cooperate. The Westie is generally fastidious and prefer to be clean, making them quite easy to house train.

Westies are generally very even-tempered and friendly dogs. They tend to be very sociable and affectionate towards humans and other dogs, and sometimes even cats (beware: even the sweetest Westie will still chase rodents and rabbits, due to their strong hunting instinct). This friendliness and social nature is balanced by a self-assured attitude and calmness. They are generally not needy, and don’t need pampering (though they may appreciate it). They can also be very playful, and are happy doing all sorts of activities, such as canine agility and hiking.

Be warned: Westies tend to bark a lot. They bark when the post comes, when a strange dog passes the house, when visitors arrive . . . for a small dog, the Westie can be very noisy! Luckily, you can train your Westie to bark less, or teach them the “quiet” command. Westies are also very fond of digging holes, so you’ll want to do some training before you let them loose in your garden. The West Highland Terrier gets on well with children, but will not tolerate rough handling.

Please fill in the below form and we will let you know when a new West Highland White Terrier litter arrives.